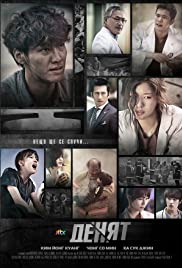 When a natural disaster strikes Seoul, a team of medical doctors and emergency personnel struggle to deal with its aftermath.