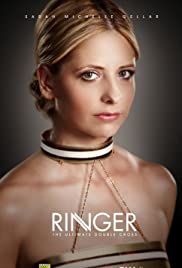 Ringer is an American television series that initially aired on The CW from September 13, 2011 to April 17, 2012. The series stars Sarah Michelle Gellar, who plays twin sisters Bridget Kelly and Siobhan Martin. On May 13, 2011, it was reported that the project had been picked up to series by The CW. On October 12, 2011, The CW ordered a full first season of 22 episodes. On May 11, 2012, The CW announced the cancellation of Ringer.