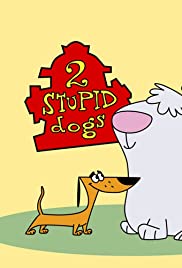 2 Stupid Dogs is an American animated television series, created and designed by Donovan Cook and produced by Hanna-Barbera and Turner Program Services, that originally ran from September 5, 1993, to May 15, 1995, on Syndication and TBS. The main segments of the show featured two dogs, called “The Big Dog” and “The Little Dog” in the credits. The Big Dog was voiced by Brad Garrett and the Little Dog was voiced by Mark Schiff. Reruns are played on Cartoon Network and later its classic animation network Boomerang in 2005 through 2006, and returned on June 1, 2009, and also returned on July 5, 2011, to Cartoon Network for the first time in ten years, but it left on September 23, 2011, and it was removed from the lineup for a replacement for Courage the Cowardly Dog on September 26, 2011.