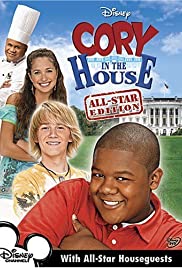 Cory in the House

Cory in the House

Cory in the House is an American television sitcom, which aired on the Disney Channel from January 12, 2007 to September 13, 2008 and was a spin-off from the Disney show That’s So Raven. The show focuses on Cory Baxter, who moved from San Francisco, California to Washington, D.C., after Victor Baxter gets a new job in the White House as the official head chef. The series marks a Disney Channel first, as it is the channel’s first spin-off. This is also the only Disney Channel spin-off series to be broadcast in standard definition for the entire length of the show. Reruns of the series have not been produced on Disney Channel, or on Disney XD; however they continue to air on the Family channel in Canada. Raven-Symone guest-starred, reprising her role as Raven Baxter in one episode.