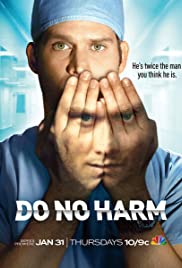 Do No Harm is an American drama that aired from January 31 through September 7, 2013, on NBC. The network placed a series order in May 2012. On November 12, 2012, NBC reduced its episode order for the series from 13 to 12 episodes, due to scheduling conflicts.

On February 8, 2013, it was announced that NBC had canceled the series after airing two episodes, due to low ratings. On April 26, 2013, NBC announced that the remaining episodes would be burned off, beginning June 29, 2013.