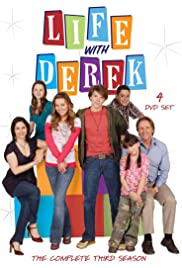 Life with Derek is a Canadian television sitcom that aired on Family and VRAK.TV in Canada and on Disney Channel in the United States. The series premiered on Family on September 18, 2005, and ran for four seasons, ending its run on March 25, 2009. The series starred Michael Seater and Ashley Leggat as the two oldest children in a stepfamily. It ended with 70 episodes and one spin-off television film, entitled Vacation with Derek.