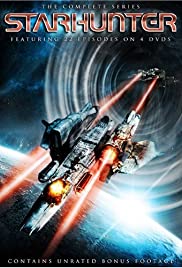 Starhunter is a Canadian science fiction television series that aired for two seasons. The series was produced in Canada by The Danforth Studios Ltd. in association with Alliance Atlantis with some photography in the United Kingdom. Grosvenor Park Productions UK Ltd. was the co-producer from the United Kingdom, and Le Sabre SA, an affiliate of Canal+, was the French co-producer, with major unofficial German participation by Das Werk.

In season one, Starhunter starred Michael Paré, Tanya Allen, Claudette Roche and featured Murray Melvin and Stephen Marcus. In season two Clive Robertson, Dawn Stern and Paul Fox were added to the cast, while the original actors except Allen and Marcus were dropped. Contrary to the wishes of the series creators, the investors in the second season blocked the return of Paré and replaced Melvin.

Season one was nominated by the Directors Guild of Canada for a Best Production Design award, and for a “Spaceys Award” by Space: The Imagination Station.

The first run of the first season aired in Canada, from 1 November 2000 to 28 March 2001. Starhunter was syndicated in the United States by Western Television Syndicators, going to air in the fall of 2002. The first season continues to re-run in many territories. The second season had its first run in Canada from 9 August 2003 to 3 April 2004.