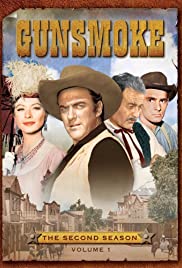 Gunsmoke is an American radio and television Western drama series created by director Norman MacDonnell and writer John Meston. The stories take place in and around Dodge City, Kansas, during the settlement of the American West. The central character is lawman Marshal Matt Dillon, played by William Conrad on radio and James Arness on television. When aired in the UK, the television series was retitled Gun Law.

The radio version ran from 1952 to 1961, and John Dunning writes that among radio drama enthusiasts “Gunsmoke is routinely placed among the best shows of any kind and any time.” The television version ran for 20 seasons from 1955 to 1975, and was the United States’ longest-running prime time, live-action drama with 635 episodes. In 2010, Law & Order tied this record of 20 seasons. At the end of its run in 1975, Los Angeles Times columnist Cecil Smith wrote “Gunsmoke was the dramatization of the American epic legend of the west. Our own Iliad and Odyssey, created from standard elements of the dime novel and the pulp western as romanticized by Buntline, Harte, and Twain. It was ever the stuff of legend.” 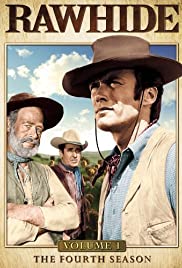 Rawhide is an American Western series starring Eric Fleming and Clint Eastwood that aired for eight seasons on the CBS network on Friday nights, from January 9, 1959 to September 3, 1965, before moving to Tuesday nights from September 14, 1965 until January 4, 1966, with a total of 217 black-and-white episodes. The series was produced and sometimes directed by Charles Marquis Warren, who also produced early episodes of Gunsmoke.

Spanning seven and a half years, Rawhide was the fifth-longest-running American television Western, exceeded only by eight years of Wagon Train, nine years of The Virginian, fourteen years of Bonanza, and twenty years of Gunsmoke.