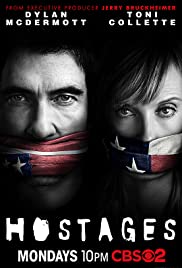 Hostages is an American drama television series that airs on CBS as part of the 2013–14 American television season. The series is based on a similar Israeli series created by Alon Aranya, Omri Givon, and Rotem Shamir which will premiere on October 13, 2013, almost 3 weeks after the American version’s premiere. Jeffrey Nachmanoff wrote and directed the pilot episode for the American version. The series premiered on September 23, 2013.