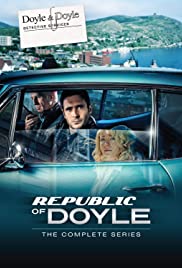 Republic of Doyle is a Canadian comedy-drama television series set in St. John’s, Newfoundland which debuted 6 January 2010 on CBC Television.

The show stars Seán McGinley and Allan Hawco as Malachy and Jake Doyle, a father and son who partner as private investigators in St. John’s, Newfoundland and Labrador. Their cases involve them in all sorts of dealings – not all of them on the right side of the law.