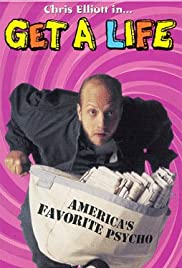 Get a Life is a television sitcom that was broadcast in the United States on the Fox Network from September 23, 1990, to March 8, 1992. The show stars Chris Elliott as a 30-year-old paperboy named Chris Peterson. Peterson lived in an apartment above his parents’ garage. The opening credits depict Chris Peterson delivering newspapers on his bike to the show’s theme song, “Stand” by R.E.M.

The show was a creation of Elliott, Adam Resnick and writer/director David Mirkin. Mirkin was executive producer/showrunner of the series and also directed most of the episodes. Notable writers of the series included Charlie Kaufman, screenwriter of Being John Malkovich; and Bob Odenkirk, co-creator of Mr. Show with Bob and David and Tenacious D.

The show was unconventional for a prime time sitcom, and many times the storylines of the episodes were surreal. For example, Elliott’s character actually dies in twelve episodes. The causes of death included being crushed by a giant boulder, old age, tonsillitis, stab wounds, gunshot wounds, falling from an airplane, strangulation, getting run over by cars, choking on cereal, and simply exploding. For this reason, it was a struggle for Elliott and Mirkin to get the show on the air. Many of the executives at the Fox Network hated the show and thought it was too disturbing and that Elliott’s character was too insane.